It’s 11 years this month since Buffy The Vampire Slayer disappeared from our screens. As we try to put a spell together to make TV execs give it a reboot, here are 21 things we absolutely adore about the best vampire show of all time.

Willow grew from babbling, geeky, genius schoolgirl to babbling, geeky, genius lesbian during the show’s seven years. To a straight audience Willow was the face of friendly homosexuality. Only Willow could utter the following line and not cause uproar in America’s Bible belt; “It’s total loss of control, and not in a nice wholesome my-girlfriend- has-a-pierced-tongue kind of way.”

The girlfriend with the pierced tongue, Tara started life as Willow’s lover but over the seasons became the mother figure of the gang. With Buffy’s mother dead and Giles in England, the blonde-haired beauty became the advice giver and ultimately the one who sacrificed most. Best line? “Can we just skip it, can you just be kissing me now?”

The dialogue of the BTVS characters constantly mentioned TV shows, films and celebrities we all know and love. They’ve referenced everything from Star Trek and Scooby Doo (the kids called themselves the Scooby Gang) to Hollywood movies (“Does anybody else feel like they’ve been Keyser Söze’d?”, “I’m being single white femaled”), and even political figures: “She’s so Evita”.

Traditionally us queers make up our families out of our friends and the same is true of the relationships in BTVS. Willow and Xander were the kernel of the Scooby Gang, with Buffy their sister and Giles their father. Our fab four could get themselves and each other out of every possible situation, go to the pub for a few scoops and sort out each others’ emotional ‘issues’ 50 minutes.

From the inspired Gentlemen in Hush to the crappy Jonathan and his dastardly duo, the baddies in BTVS have gone from the sublime to the ridiculous. We’ve had a hell goddess, Glory, a man-made robo-villan, Adam and an apocalypse obsessed Mayor to name but a few. Oh yeah, and vampires, lots and lots of vampires.

In all of the Buffy characters there was a yin-yang thing going on. Angel had his constant battle against his evil soulless Angelus, Giles became Ripper, and Buffy fought against Faith’s lust for the kill. It’s gentle Willow, however, whose darker side was the most nasty. She not only had her inner vampire, but also decided to bring about her own version of the Apocalypse. Nice.

There seemed to be a general rule of thumb on the Buffy set: bad equals leather clothes and biker boots, good equals latest fashions in pastels, and Willow will always look ridiculous. Poor Willow, from yellow dungarees to fluffy pink angora sweaters, she really did suffer most.

Originally only written into a couple of episodes, Faith proved so popular that she ended up in a whole lot more. Sexy, sassy and with ’tude to spare, Faith proved to be a much more watchable slayer than Buffy. She was mad, bad and dangerous to know. Faith stopped wearing leather in the final episodes, which went a long way to help her redeem herself.

Into each generation a slayer is born. One girl in all the world, a chosen one…  it’s a pity this one was so holier than thou. She would have rated much higher on our list, had it not been for those damned save-the-world speeches in season 7.

A cocky and witty vamp from 19th century England, Spike got his pre-bloodsucker name, William the Bloody, because of his bloody awful poetry. After being sired, he bleached both his conscience and his hair and went on a gruesome rampage feeding off hundreds of innocents. Then he met Buffy and, six years later, got his soul back and went all gooey inside. What a waste.

Ok, Willow and Tara was main text but what about the homoerotic subtext? Spike and Angel had a very long relationship which, in its darker days, was all about watching each other ‘feed’, Buffy watched with hooded eyes as Faith strutted into town all attitude and sex appeal and Xander (poor Xander) ate spiders to demonstrate his love for Dracula.

Before Buffy was re-assigned to the more adult network UPN, it was stuck on the teenage-loving station WB. As a result, some things could never be said, they had to be hinted at. ‘Magic’ became synonymous with sex – Willow and Tara ‘did spells’; staking was the ultimate penetration and Giles never got any. In the two years UPN housed Buffy, Willow shagged not one but two women, Buffy rode Spike into the ground and finally Giles got his due.

The most quotable character in the show, it’s hard to believe Anya was only in three seasons. Without any qualms, the former demon turned nymphomaniac capitalist uttered exactly what was on her mind and won her way into our hearts: “For a thousand years I wielded the powers of the Wish. I brought ruin to the heads of unfaithful men. I was feared and worshipped across the mortal globe. And now I’m stuck at Sunnydale High. And I’m flunking Math.

The best bud and the comic foil, Xander seemed to be the only person on screen who thought that the kids were living a weird life. Xander was more than just the comic relief, though. He had the warmest heart and always looked after the women in his life. Even if they could all kick his ass.

Mr. Broody, deep ‘n’ dark with a line in destruction, Angel was the ultimate tortured, smouldering soul. He fought against his inner demon, wore long coats and never smiled once. Still, he got his own show.

From the opening Nerf Herder theme tune to the hip bands performing in the local nightclub, Buffy featured some seriously cool music; Michelle Branch, Aimee Mann, K’s Choice and Joey Ramone to name but a few. 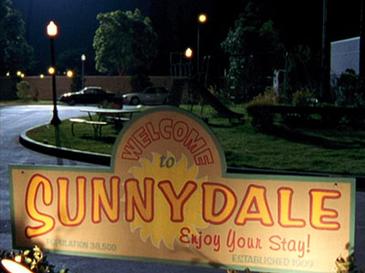 Imagine being a real estate agent in Sunnydale? This Californian hamlet was built on top of a Hellmouth: a portal to a rotted dimension that just about every bad guy and gal wants to unlock, thereby unleashing hell on Earth.

18. Once More With Feeling

At the height of Buffy’s popularity out popped this strange little oddity just to keep us on our toes – a musical episode. It was a risk worth taking as Once More With Feeling is on every fan’s favourite episode list, was nominated for a few awards to boot and became a platinum album.

Once More With Feeling features the most overt lesbian lust ditty in the history of prime-time programming, ‘Under Your Spell’. Tara warbles to Willow, “I feel you inside, surging like the sea, lost in ecstasy, spread beneath my willow tree”. Depraved!

You may have cried at the deaths of some of our heroes, but you have to admit it was the perfect way to end it all. At last Buffy is one of many and could have the normal life she dreamed of. I have the feeling she’ll be bored out of her mind before you can say, “Let’s do a reunion special!”

Without him, there would be nothing. Grr, ahrr…..

21 Things We Love About Buffy

I consent Remind me Later

I consent Remind me Later