Body image and body positivity has been an ongoing struggle among the GBT+ community for many years, however Twitter reveals a darker underbelly to this issue as six packs and toned bodies are used as a shield for people to promote toxic behaviour without losing large numbers of followers.

‘No fats, no femmes, no Asians, no Blacks’ is a term that has been seared into the fabric of GBT+ dating apps like Grindr. It acts as a rallying cry for predominately muscular white men to exert a false sense of superiority over the queer community. This sentiment has warped into a dangerous mindset where a person can preach hurtful rhetoric and suffer no great consequences because of their external features.

On Twitter, gay porn actor Billy Santoro promoted ‘slamming parties’ – a group sex party where GBT+ men take drugs such as methamphetamine or mephedrone, often by injection, for an OnlyFans video. After being criticised over glorifying chem sex, he wrote, “You are a moron if you think you aren’t having chem sex, but you just smoked a bowl and popped a viagra and passed the poppers…Get off your high horse!” Despite the lack of acknowledging that he is profiting off this dangerous act, without offering any form of apology or even an attempt to raise awareness around safe drug use, his Twitter page has 235.6K followers and his OnlyFan page has 3.9K likes.

In 2019, Santoro tweeted that he would not film sex scenes with anyone who has put on weight, stating, “I am not a fan of looking at your fat body rolling around all over Twitter.” Similar to the ‘slamming parties’ issue, it is his follow up comments which highlight his real thoughts. He wrote, “This is my platform to communicate how I see fit. If you don’t like it, I honestly don’t give a sh*t. The reason I have the following I do is because I am real. I am a b*tch to people who are b*tchy. And sweet to those who aren’t. I don’t filter my thoughts and never will.”

This toned body image men are told to strive towards has warped into a social currency which can be exchanged for a free pass to strip away the ‘filter’ and unleash a barrage of toxic behaviour without worrying about long-term consequences. In 2018, 53% of young gay men said that body image was one of the key issues affecting their mental health, as reported by the National Youth Council of Ireland (NYCI). There is a continuous pressure placed upon GBT+ men to appear a certain way perpetuated by the mindset of Masc 4 Masc.

In England, the Mental Health Foundation released the results of a poll showing “worryingly high numbers of people among the LGBT+ community have experienced body-image anxiety.” 33% of participants revealed that they had suffered suicidal thoughts due to their body image. 45% of bisexual people described having experienced feeling ‘disgusted’ about their physical appearance and 45% of gay men said they felt ‘depressed’ over how they look.

Continuing this rise of toxic behaviour among GBT+ men, another person on Twitter has been called out for racist comments after he tweeted, “Just because someone prefers white doesn’t mean they are racist, you have your own taste and in bed it’s not all inclusive. If you wanna f*k a dog you can, you don’t hear “he’s zoophilic” that’s your preference so go for it.” The horrific racial abuse contained in this language highlights a clear issue within the community, as the 2018 Stonewall survey reveals 51% of queer people of colour have experienced discrimination from within the LGBT+ community in England. The person further tweeted, “I’m so tired society trying to make everything inclusive and ___ rights matter.” 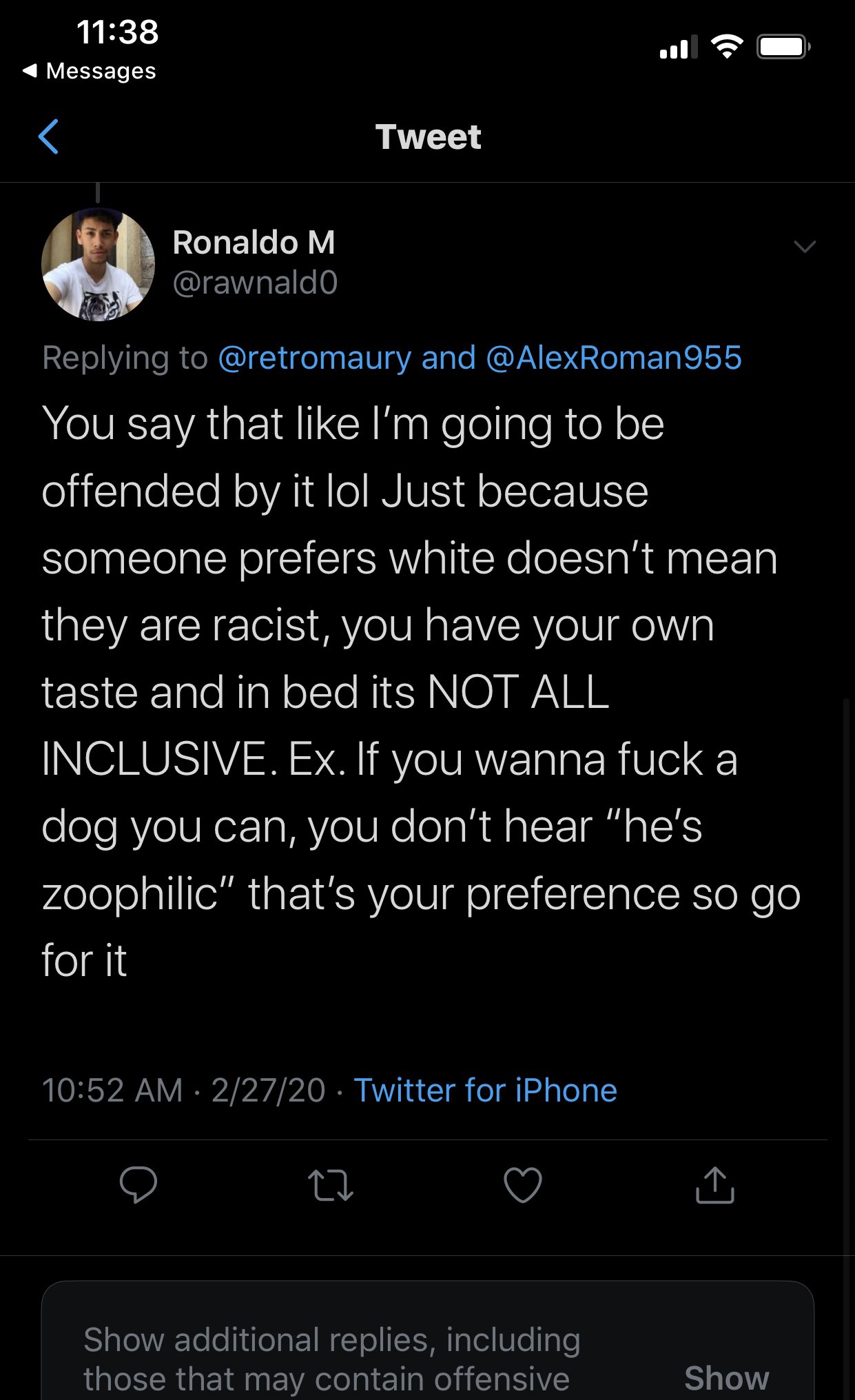 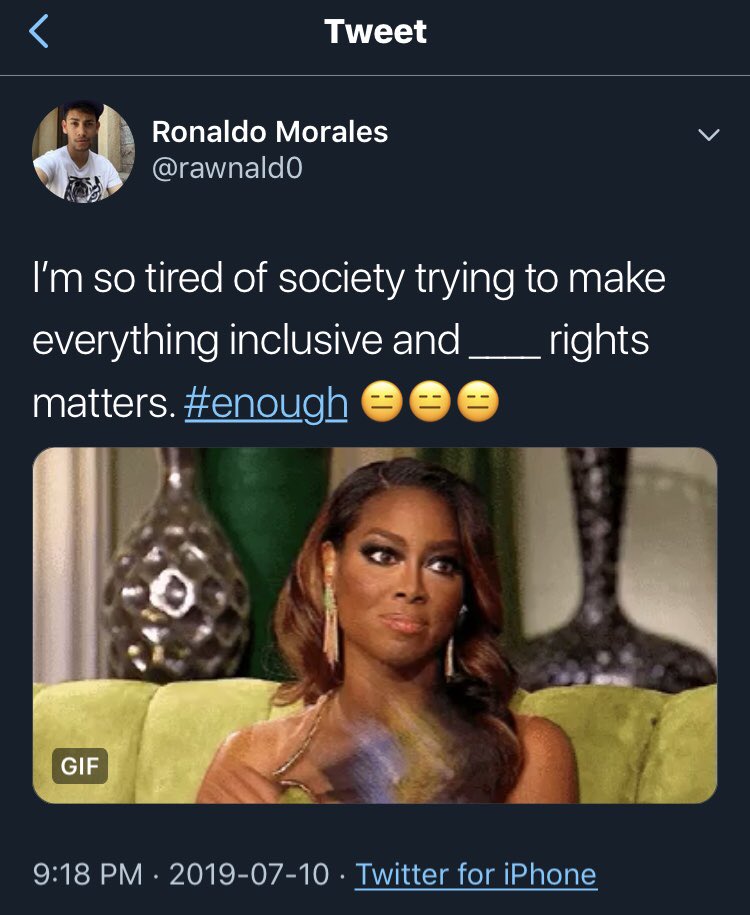 OnlyFans actor, Bryan Hawn, demonstrates this discriminatory undercurrent enshrined within toxic masculinity as he previously Tweeted anti-semitic and racist comments. He allegedly stated, “How are you a doctor and don’t know this? Oh you are Jewish…got it! You just became a doctor for a paycheck”, and“Privileged is the word poor people use who can’t figure out how to get off their ass and work for what they want it life. They think it all just magically appears because of your skin colour. The joke is on you.”

Following online backlash to his racist Tweets, Hawn posted on Twitter, “I sincerely apologise for anyone receiving hateful, or racist tweets, my page was hacked and over 1500 hatefilled tweetes were written over a 3 day period. This is nuts! You guys know better. No matter the gender, race, religion, or culture, I have nothing but love for you here.” Within the alleged three day period of hacking, a video of the Only Fan’s actor and his pet going to the gym was uploaded.

People refused to accept that Hawn’s account was hacked and numerous voices have called him out. In response to the demand for further evidence of the hacking, he tweeted, “My page will not be a platform for any form of hate whether its political, religious, racial or jealousy. Anyone who wants to continue spreading this nonsense will be blocked immediately. I have a zero-tolerance and you will be silenced without question.”

Please note: My page will not be a platform for any form of hate whether its political, religious, racial or jealousy. Anyone who wants to continue spreading this nonsense will be blocked immediately. I have a zero tolerance policy and you will be silenced without question.

Emerson further tweeted, “I’ve deleted the tweet bc it seems to be hurting people (and the dog piled responses are pretty rough for my well-being tbh) but the original video can be found here if you care to see it in context.” With 23,862 views and 1.2K likes on the YouTube video, his attempt at an apology reads as publicity for his YouTube channel. Being applauded for showing abs through a thin veil of ‘wokeness’ exemplifies the level of protection muscular men have within the community.

(3/3) I’ve deleted the tweet bc it seems to be hurting people (and the dog piled responses are pretty rough for my well-being tbh) but the original video can be found here if you care to see it in context. https://t.co/RkCmZypJCv

Problems surrounding body image take on myriad different forms, ranging from the more direct approach of Santoro to the subtle subversion seen through Emerson’s tweet. For some in the GBT+ community, there is a clear need to break away from this superficial facade and look deeper into a person’s values.

If GBT+ men only ever judge each other’s worth on the basis of physical appearance, things will never change and toxic beaviour will continue to be excused. Six pack abs cannot continue to mask hurtful and dangerous language, it is time to uncover what lies beneath the masc.

Opinion: Six packs should not be a free pass for toxic behaviour