A DUP councillor has come under fire after claiming COVID-19 was God’s punishment for the legalisation of abortion rights and same-sex marriage in Northern Ireland.

Ballymena representative, John Carson, suggested that the COVID-19 pandemic was a sign that Northern Ireland is “now reaping the judgement of God” in a Facebook post published March 31. He also compared himself to the Biblical story of Noah and the Flood.

In the Facebook post, Carson wrote, “With all the focus being on Coronavirus it has went relatively unnoticed that from today abortion is available on demand up to 24 weeks. I said when abortion was legalised that our nation would be judged by GOD because of its departure from his word and the legalisation of the murder of the unborn child as well as same-sex marriage.”

DUP Councillor John Carson here blaming same sex marriage and abortion legislation in the North for the Coronavirus outbreak: "You reap what you sow." pic.twitter.com/mxBneor5pg

The DUP councillor further stated, “I was laughed at and mocked by some but as I said at the time they laughed at NOAH until the rain started. You reap what you sow and our nation is now reaping the judgement of GOD because of an immoral and corrupt government. It is time to repent and turn again to the GOD of our Fathers.”

Speaking to Belfast Telegraph, policy and advocacy manager of the Rainbow Project, Gavin Boyd, stated that the comments were “disgraceful but not at all surprising that a DUP elected member would try to blame LGBT+ people and our partners in the women’s movement for the coronavirus outbreak just as they have blamed us for Hurricane Katrina and other natural disasters in the past.”

Boyd further detailed the group’s response to Carson’s hurtful rhetoric, “The Rainbow Project and our partners in the LGBT+ sector and women’s sector are still supporting our communities at this difficult time. We are still providing counselling services and social support to very isolated people. It is very telling where the priorities of some DUP elected members lie when they seek to blame marginalised people for a global pandemic.”

A brief statement addressing the disgusting comments made by @duponline councillor John Carson. We expect immediate action from @DUPleader pic.twitter.com/4tiJ0hqzIq

Following widespread criticism, the post has since been deleted from Carson’s Facebook page. Speaking to the BBC, he said that he stood by the comments yet would not discuss it further. The councillor stated, “I am not getting into a brickbat with the media on this.”

The Rainbow Project has called on the DUP party to take disciplinary action against Carson. Boyd said, “We look forward to hearing from Arlene Foster a strong denunciation of this disgusting slur from her councillor John Carson and we expect disciplinary proceedings to be commenced against him immediately.”

On the Nolan Show, the DUP distanced themselves from Carson by claiming he was expressing a personal opinion and not that of the party. They state, “This is a global pandemic and our focus is on protecting lives in Northern Ireland.”

When Nolan show contacted Ballymena DUP councillor John Carson re his comments blaming married gay people & those who choose abortion for the emergence of Coronavirus,he was unrepentant & called me a “reprobate”
He remains a member of DUP
DUP say it is not the view of the party

DUP MLA Trevor Clarke liked Carson’s post on blaming COVID-19 on same-sex marriage and abortion rights. However, he refuses to comment on whether he would retract his like.

The DUP councillor has allegedly threatened to file a lawsuit against the Nolan Show following the report on his Facebook post calling COVID-19 a ‘punishment’ from God. Responding to further criticism over his comment, Carson has reportedly stated, “They laughed and mocked my saviour too, but some day soon their laughs will turn to screams.”

Carson has gone on to say his comments on social media were ‘misinterpreted.’ He states, “Anyone who knows me will know that I would not intentionally set out to cause hurt or offence to anyone and if l did then for that I humbly apologise.” 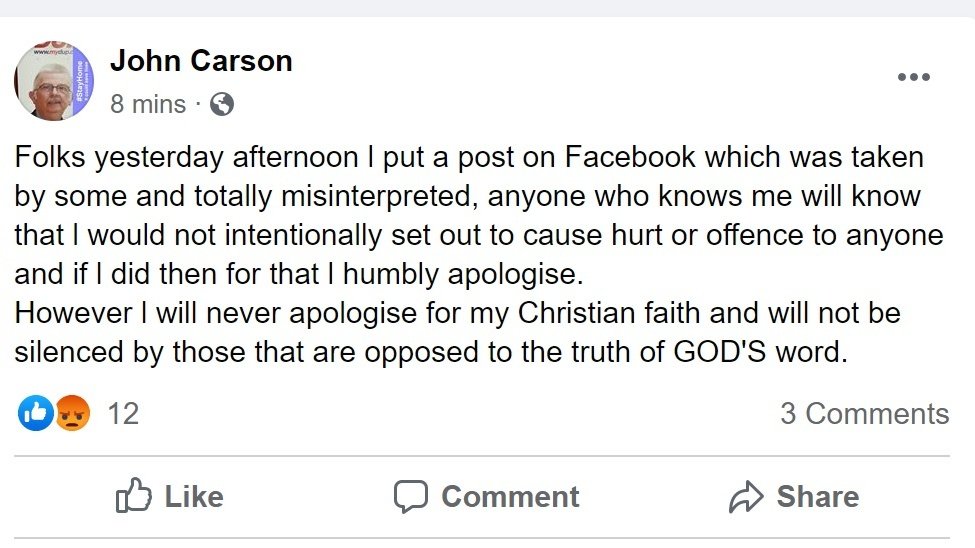 The DUP councillor finishes the post with, “However I will never apologise for my Christian faith and will not be silenced by those that are opposed to the truth of GOD’S word.”